The Sh*t you need to know about ICO’s 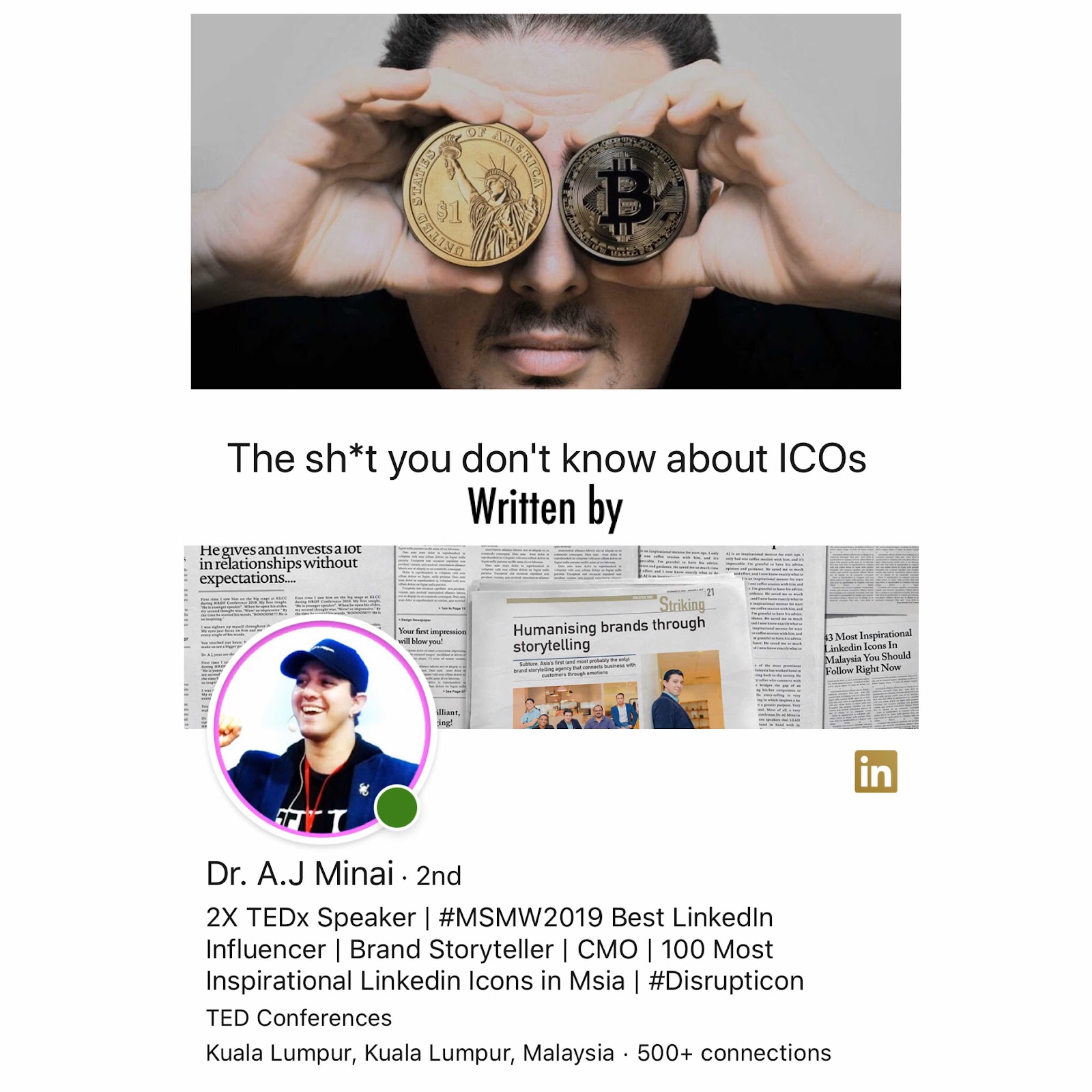 With regards to an Initial Coin Offering (ICO), the reality is that the majority fails more than anything else because of an over-obsession on all the “Bells & Whistles” instead of just keeping it simple & recognising three (3) VERY BASIC things that will bolster your ICO success substantially.

(a) The fundamental idea behind why you’re pivoting on an ICO? Of course the idea needs to good, but is it something that people will rally behind? Is it truly something that adds value or solves a problem? If you aren’t clear on this, then believe us — you’ve already got problems.

(b) The quality of your white-paper. We’ve all heard that 90% of the ICOs out there are bogus. Well that’s true and not true at the same time. Many of the schemes accused of being ponzy are in-fact just really really badly explained at a white-paper level. Here’s what’s happening today ladies & gentlemen — this is a new space in which every second tom, dick, and harry claims to know what they are doing when the reality is simply, that very few actually do. We are at the tip of the iceberg today and that’s just the blunt reality we all have to embrace while we keep learning as we go through this. So I can’t emphasise this enough, the quality of your white-paper has to be top-notch. It can’t be a bunch of tech jargon slapped together to impress someone. It’s got to be value on paper from the minute someone, anyone starts to read it.

(c) Influencer & Content Marketing should be your breakfast every morning when you’re ramping up to ICO. In the crypto-world, selecting the right advisors really helps. Getting as much as PR as possible really helps. Roadshows need to be happening every damn month if its possible. You need to shout “legit” from the get-go. More often than not, forget about having massive A&P budgets in order to do this. We live in a bootstrap world in the midst of a bursting gig economy. You can build epic partnerships and influence the sh*t out of the market today IF you know why & what you’re doing.

With the aforementioned three points, the icing on the cake should be an adaptive & agile mindset when you’re on this journey. Speed is key in ensuring that your ICO is on track, all the time. If you notice a problem with the quality of your white-paper, fix it now. If you think a bunch of advisors on your board aren’t bringing the value they were meant to, fix it now. Don’t wait on anything when it’s down to you ensuring a successful ICO. You need partners who know why & what they’re doing.

So what’s the checklist to Success? News flash. There isn’t one.

Here’s a checklist of nine (9) best practices you ideally should eat, sleep, & breath when you’re ICO-ing. At the very least, they should aid & amplify the success of your ICO:

ICO or not, at the core you need to have a product or service that a lot of people want to build on top of and ultimately use. Nurture community, be authentic, & keep them updated regularly through some form of two-way engagement. Let me tell you, bounty campaigns don’t work anymore in this market. You’ve got a better chance with things like Telegram, and even those can be sh*tty as hell. The key is to build an “engaged” community before you launch a product or service. Bottomline, its important to build up your community earlier than later.

Understand two things. Firstly, that you need to find investors as quickly as possible before anything else starts when you’re talking ICO. Your investors are your biggest marketers, especially if you’ve got the right ones. Secondly, don’t underestimate demography but don’t obsess over it either. We live in the age of psychographics now. More than half the ICOs out there today regret that they didn’t explore the China market as much as they first should have. So do whatever it takes to build the smarts as well as the connections to ensure you know how to keep your investors happy as you build epic partnerships for the ICO.

So here’s a reality check in the crypto-world. Everyone’s a f**king cowboy and the industry, let’s face it, is the wild wild west for the most part. If you don’t find the “right” team players for your core ICO ramp-up & management — you are in for a nasty ride. The team is crucial. Either you or your consultants need to be 100% clear on what to look for, in order to build a strong in-house team for ICO. Don’t underestimate the need to be absolutely meticulous when it comes to your core ICO team. Invest time, money, and resources into this like you’re building the next DreamTeam for the NBA (that was so 90s, sorry)

There are hundreds of ICOs that are all active at the same time. So how the hell is your ICO going to stand out? Having an MVP at the very least is crucial. If you’re still at “concept” halfway through to ICO, you’re in trouble. People will rally behind you if you give them a real reason or product. Contracts aren’t the only thing that have gotten smart on the blockchain these days. The market is watching your every move. So ensure that your business model is real, ready, & easy-to-understand.

You need to be able to count on your team & advisors to tell you what you need to hear instead of what you want to hear. 5 out of 10 times, I’ve told companies that their ICO just won’t happen. Why? because of a variety of market variables that you and I can’t control. Timing is crucial, and so having a team with you who understands when & how to max out your ICO is absolutely imperative. An example of that was when China had just banned ICOs a while back — do you think that would have had an affect on the rest of the market? Hell yeah it did, and Bitcoin tanked for a bit back then.

Too many companies fail in this industry simply because they have no clue around what to do in order to put effective operations, customer support, and legal clarity into place after an ICO goes live. The market needs to see your company and its ICO as a legitimate opportunity. KYC, Bookbuilding, Refunds, Compliance, Token sale spots, Traffic, Website, etc — you name it, be absolutely clear on what your brand needs to do in order to keep the ICO going full-steam ahead, transparently.

What do you do if a scammer impersonates or spoofs your site? How does your team react to those who will do anything to hijack your ICO because they know for a fact that yours is one of the few that’s legit. FYI, ICOs went from 90% capping to 90% scamming in a matter of months. Do you even know why? One of the most important things you need to be conscious of is how to effectively steer clear of scammers, hijackers, & impersonators during and after your ICO.

Every ICO has a different way of building awareness. It could be conferences, articles, PR, websites, ads. It’s critical to know your value, your audience and your message & then pick the right channel for the audience. Every brand is different. Some have massive marketing budgets which undeniably make visibility a lot more easier. Others don’t have that sort of cash or coin behind them. So that’s when your team, your advisors, or your consultants need to get creative and do nutty things to get your brand noticed in ways that other would never do. Don’t be afraid to get yourself out there.

A lot of ICOs position their investors & advisors as their “call-to-credibility” in the market as they ramp-up towards pre-launch and onwards. But they have no f**king clue that these guys aren’t just a credibility boost. They are value-creators waiting to happen if used in the right way at the right time. Picking and choosing the right advisors particularly is something of an art. My advice is to do a thorough gap analysis coupled with an understanding of your “why”, after that you should be able to identify and invigorate your ICO journey with connections that make things happen instead of just sitting there & looking pretty!

To all those who read this up till here. Thank you very much & best of luck building your product, your community, your fundraising platform, and in getting your ICO mechanics in place.

Having many avatars in the market, Dr. A.J Minai is also CEO of Omni Payment Solutions Sdn. Bhd – an upcoming, mobile platform that’s set to disrupt the way we spend, pay, & transfer money on a daily basis using Blockchain. He is also an investor at HODL Miners alongside a mentor on a variety of subject matter including Fintech & BlockchainI  at brands like Futurelabs, Ubaru, & Supercharger.