NICK CAVE – UNTIL at Carriageworks

Untiil is a collaboration  between Carriageworks, the Massachusetts Museum of Contemporary Art (MASS MoCA) and the Crystal Bridges Museum of American Art.

Until makes you feel as if you have stepped directly inside the mind of Cave’s mind….. it’s a bit of a mind bender , I reckon!

The centrepiece of NICK CAVE: UNTIL is Crystal Cloudscape, a 12 metre long and six-metre wide sculpture, weighing over five tonnes, and suspended within the Carriageworks public space. Made primarily from thousands of crystals, beads, and found objects, visitors are invited to climb one of four ladders to view the top surface of the work where an uncanny bricolage of objects that reference an American vernacular past and present populate a landscape simultaneously alluring as it is menacing. 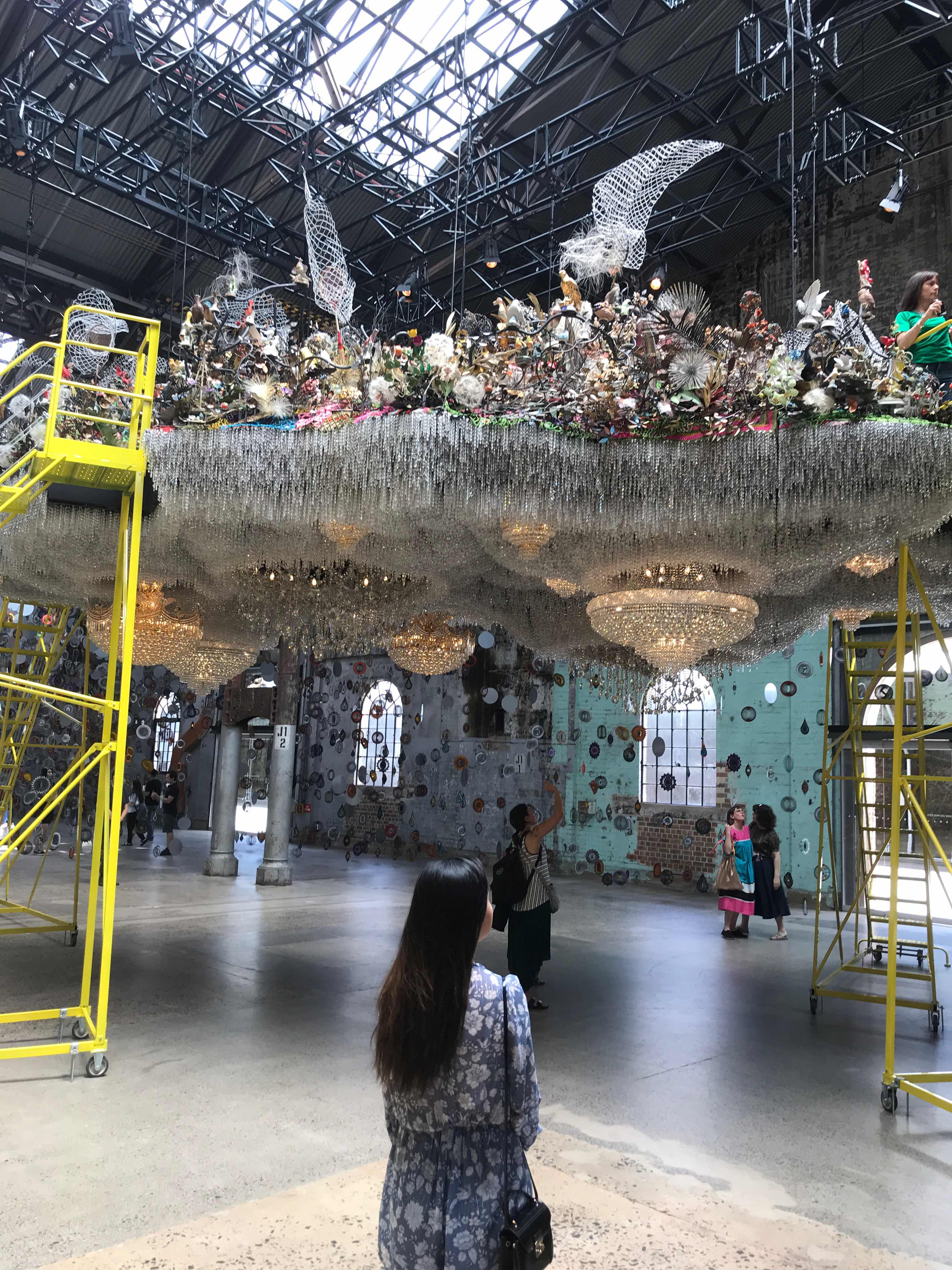 You can view the Crystal Cloudscape from above, climbing one of the four ladders up to the surface of the work, or observing the entirety of the constructed landscape from a viewing platform. 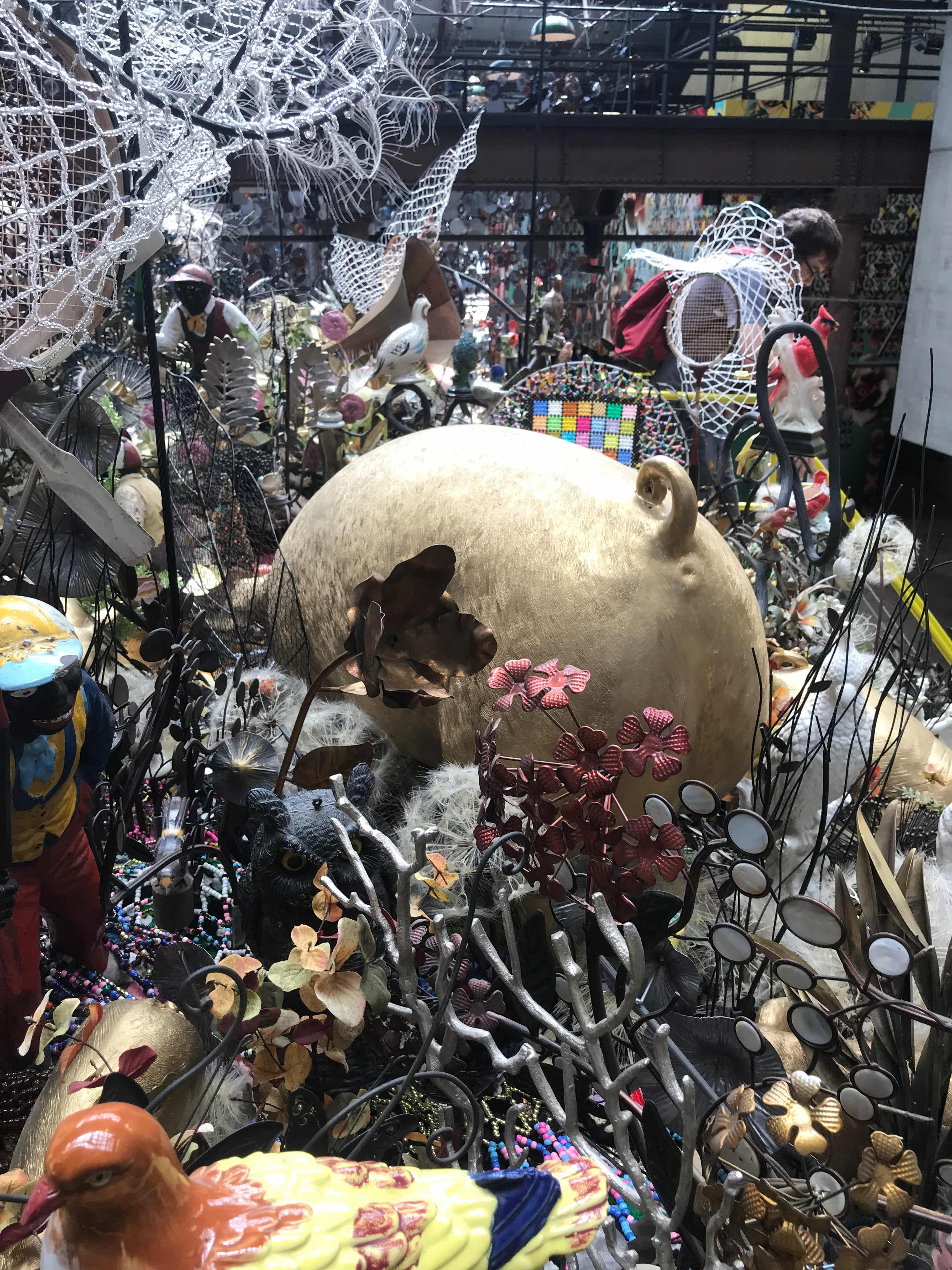 – Kinetic Spinner Forest consists of 16,000 hanging mobiles made from metallic spinning garden ornaments. On close inspection these seemingly playful objects have at their centre the shape of a teardrop, bullet or hand-gun. The initial enchantment of the forest is ruptured by the pointed reminder of the omnipresent and polarising position that guns occupy in American culture. 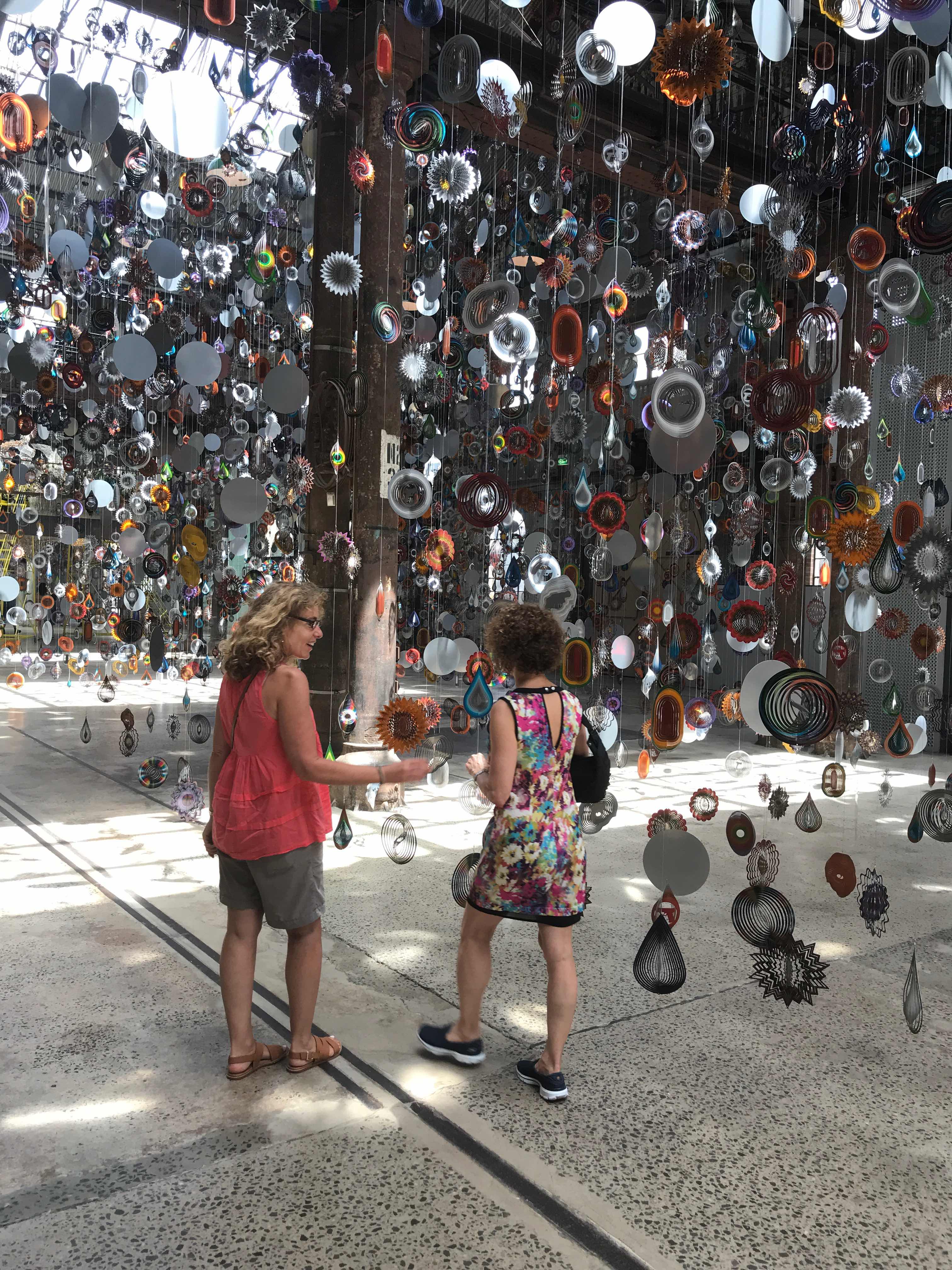 – Beaded Cliff Wall is an extraordinary installation constructed with millions of plastic hair pony beads. This site-specific installation and has been completely redesigned and reconceived for Carriageworks. The beaded curtains are displayed in their entirety, running the lengths of the gallery walls and creating a room within a room. Visitors can walk between the curtains that read as both luscious textiles and powerful protest flags. 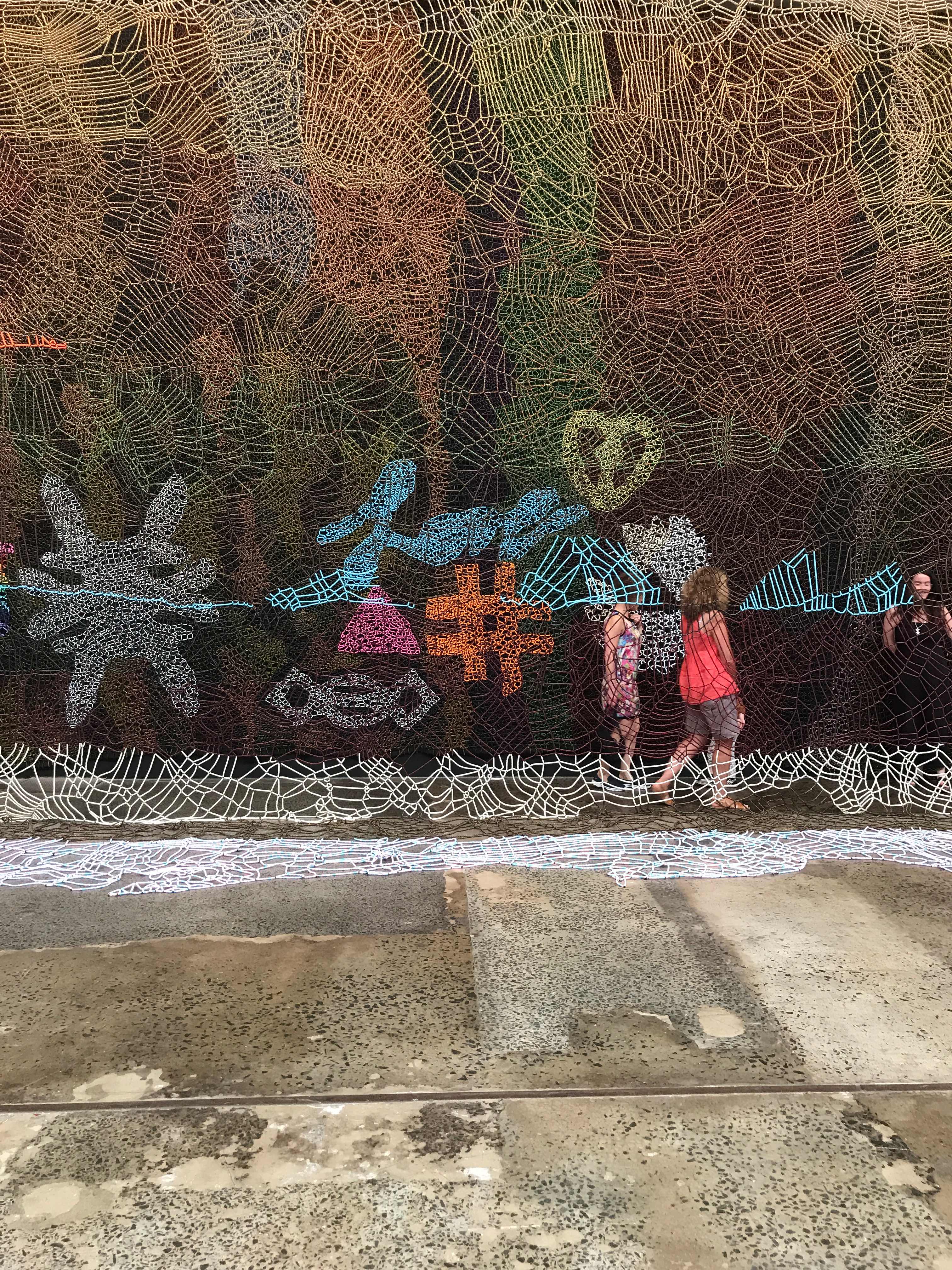 – Flow/Blow is a fan propelled wall of shimmering party streamers. The life-giving, cleansing and healing properties of water and oxygen are writ large, inviting viewers to take breath.- 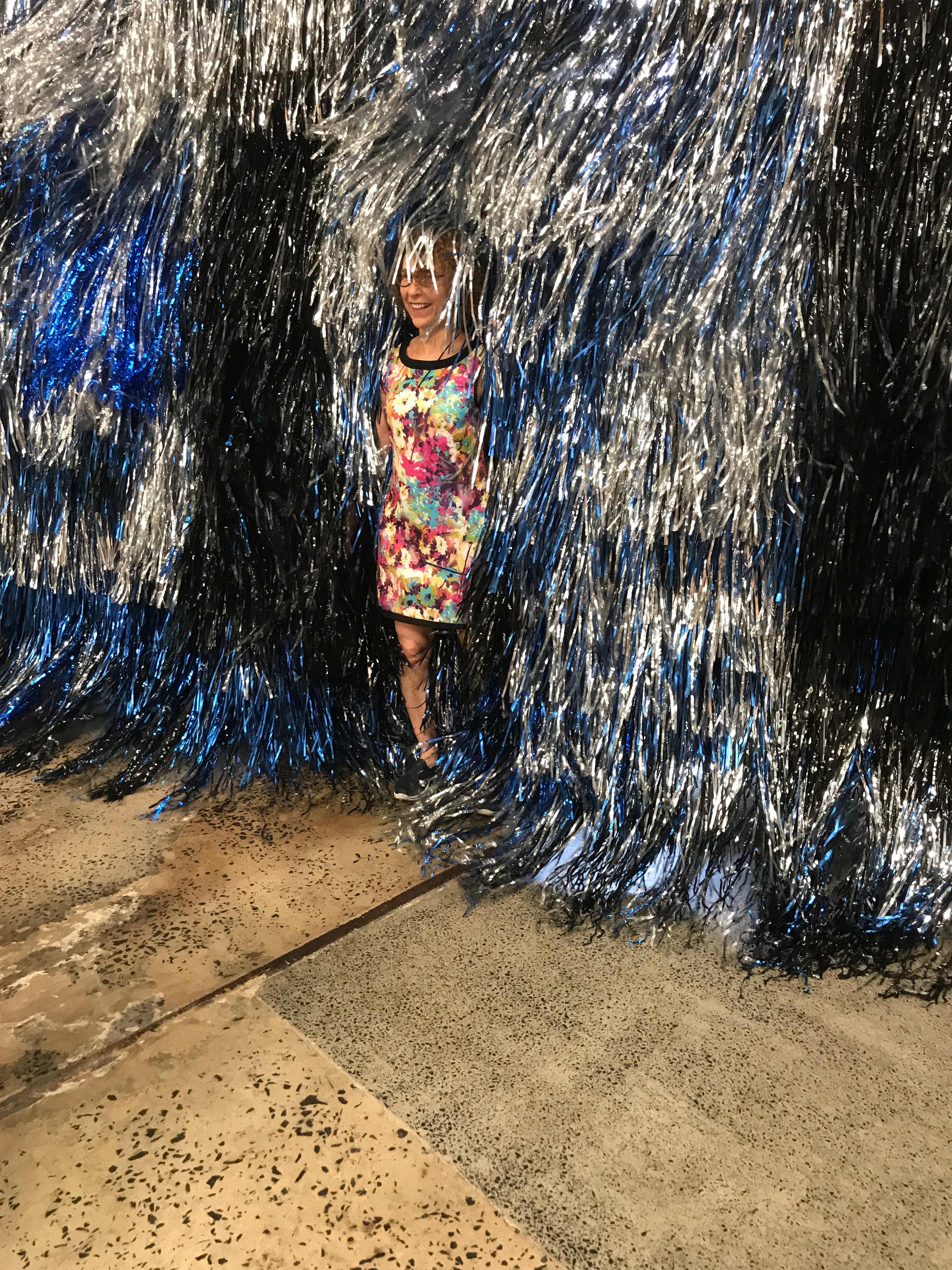 – Wallwork is a kaleidoscopic collage of images mostly adapted from Crystal Cloudscape. The image of ‘Jocko’, the eternal gatekeeper and messenger, is interwoven with flowers that represent renewal, and birds who both surveil and bring news.

This project is proudly supported by Sydney Festival and media partners The New York Times.

Latest Blogs
The case for masks!
So what does The Matrix, Neo, Mindfulness and Resilience have in Common?
Great Job so Far ScoMo and Josh
Time to get your Profile and Centre of Influence happenning
Living your best Life
Ten Steps for Rebuilding Trust
Where are you on the wealth Pyramid ?
Proud to be an Australian
So who will dominate the 21st Century?
Love , Marriage, Companionship and Being Alone