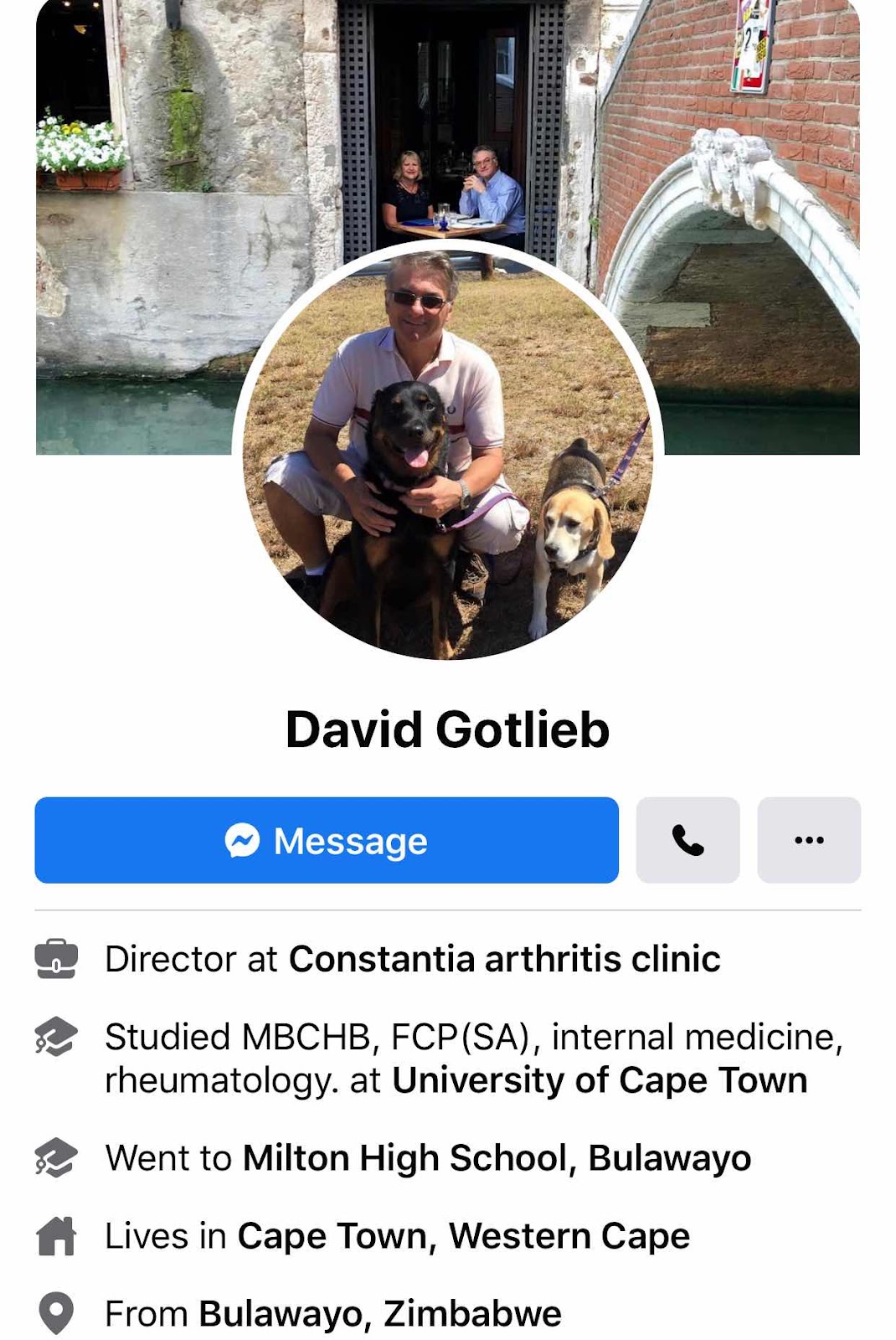 David’s Covid opinion update to my article from April this year.

My article from April, remains as relevant now as when I wrote it.
This represents an update opinion on how I see it.

I still am a hydroxy/chlo supporter, and a recent study supported it.
The previous studies were at excessive doses and showed some cardio toxicity.
However normal doses are safe.

The following 9 step process is a possible effective treatment

All models and experts have dissapointed.
My non expert opinion is that it’s about the deaths not case numbers.
Analysis seems to show a curve peaking at 2 months and lasting 4 months at which death rates drop despite case numbers.
So USA should be much better in terms of mortality risk at mid to end September.
There is NO vaccine coming.
The virus will become less virulent despite contagion over time and will disappear in the next 6 months with a short less toxic resurgence next February.

Cape Town mortality is going to have peaked by now and subside end August, early sept 2020.
Gauteng mortality will subside 6 weeks after Cape Town.
Our lives and economies will slowly recover over the next year, except South Africa will be economically devastated.
We will be in trouble and it’s going to be hard.

Thoughts regarding the Corona Epidemic…

There are some terrible harsh realities that the world must accept.

The virus is NOT going away.

The lockdown has been in place, but made us realize that new case numbers persist, and that we are delusional to think we are going to kill this virus.

The lockdown will NOT get rid of the virus.

To this end we have to accept certain realities.

It’s not about getting rid of the virus, it’s about understanding that we will NOT get rid of it for the next year, or more, as it burns it’s way across the world, until we gradually develop a resistance, or even better, some REAL treatments or vaccines against it.

Unfortunately, we will have to literally start normalizing the consequences of the virus. Some people are going to die and we can only do our best to treat them as they come. We have to accept that it’s an ongoing risk for all of us especially the elderly, and social distancing will be needed for the at risk populations.

Other diseases and conditions will also need treatment, and we will see a rebound in these as people start to bring their complaints to the hospitals again.

A country as a whole, and its people, as individuals, cannot continue to exist without income.

We have to resume life and the economy, and the politicians have to start to verbalize this TRUTH.

This TRUTH, is that the virus is NOT going away for a long time, and that some, but in fact, relatively few people, are going to die, compared to the numbers of infections.

It is VERY important to reassure people that the overwhelming majority of people, in fact more than 95% will be fine.

The virus is much more prevalent than people realise.

Spread is already much more than realized, due to failure to count asymptomatic individuals.

The virus is therefore even LESS lethal than thought, since the true ratio of mortality is overestimated, by not including the asymptomatic, as yet, unknown numbers.

To a degree the media have stirred up emotions, and influenced the world reaction into ongoing lockdowns and staggering destruction of economies, that are leading to incredible poverty, the consequences of which, are still to come.

NO country or government could have been prepared for this.

The expert advisors, ie Dr Fauci, amongst others, did NOT know what the realities of this virus are. There WAS no experience on this issue.

Models were and are still, all wrong, because there has NEVER been a similar problem.

The lockdowns have not worked to CURE the virus.

The lockdowns did work in one respect…they lowered the curve of acute admissions and bought time, and enabled the systems to develop a better public health coping ability.

It’s about managing the EXPECTATIONS of the public.

The virus will be NOT be GONE  in The short or medium term.

But the time of lockdowns has passed.

There needs to be hope!!

Hope is a human requirement
.

So what is going to happen?

The virus will stay in the communities, until either natural resistance increases, or less likely, a vaccine is developed.

The virus will spread and many people will get sick, but MOST will be fine.

Some people who are at risk will get the virus, and regrettably may not survive.

We have to accept that it’s an ongoing risk for all of us especially the elderly, and social distancing will be needed for these at risk populations.

The economies will have to open up.

Humanity must henceforth look after the entire planet including wildlife, the environment and preserve it.
People need to learn the fundamentals of life, especially togetherness and caring and thought for the less fortunate.

There is hope, because at the end, hope is all we as a species have.

The road ahead is going to be very hard.Keep strong. Keep safe. Hold on to your hope.And for those who have faith…keep that too!

Latest Blogs
What skills are needed to get a Job in the Future of Work ?
Australian Tech Globetrotters can work from Home
Healthcare – time for Disruption – The Great Unlock
Welcome to the Virtual Classroom – it’s immersive, engaging, and it’s part of the NextTech Revolution
Is there a massive disruption about to occur in the bloated University Sector?
The Nexttech Revolution – lifelong learning – There is an opportunity to ride the wave of lifelong learning
How to survive and thrive with an entirely remote workforce. How do you work together when you are, in fact, alone?
Drones as a first response – the NextTech Revolution
The 4th Revolution – how do we get ready?
Five Engagement GemsThat Make a Difference and creates Resilience in your team