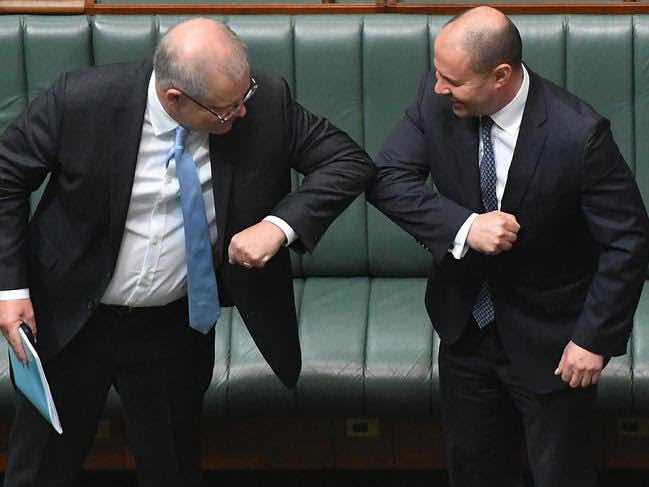 Scott Morrison and Josh Frydenberg
Dear Ivan, Today’s National Accounts confirm the devastating blow to the Australian economy from COVID-19. Real GDP fell in the June quarter by 7%, which is the largest fall on record.  Behind the numbers are heartbreaking stories of hardship felt by everyday Australians.  The Government is doing everything possible to cushion the blow. Our strong economic position going into this crisis gave us the financial firepower to respond. Without JobKeeper and other measures to support our economy, 700,000 more jobs would have been lost and the unemployment rate would have been 5 percentage points higher. This crisis is like no other. Globally, the equivalent of nearly 500 million full-time jobs are estimated to have been lost over the first half of this year.The OECD forecasts the global economy to contract by 6% this year. This compares to the 0.1% contraction in 2009, during the Global Financial Crisis.In the June quarter, Australia’s GDP fall of 7%, compares to a 9.1% fall in the USA, 9.7% fall in Germany, 11.5% fall in Canada, 13.8% fall in France and a 20.4% fall in the UK. While today’s numbers are sobering, they had been expected to be even worse. In March, Treasury was contemplating a collapse in GDP of more than 20% in the June quarter. In May, it was forecasting a GDP fall of over 10% in the June quarter.With the spread of the virus being contained, in May, National Cabinet agreed to a three-step framework to achieve a COVID-safe Australia and the lifting of restrictions by July. As restrictions were gradually eased, the recovery began. Consumer confidence had increased for nine consecutive weeks and has now recovered 70% of its fall.Business confidence has recovered nearly 80% of its fall. Of the 1.3 million people who either lost their job or were stood down on zero hours following the crisis, more than half were back at work by July. This gives us confidence that Australia is better placed than most other nations, and by containing the virus, we can chart a path to recovery.The road out will take time and there will be bumps along the way.The fall in GDP in the June quarter does not include the economic impact from stage four restrictions in Victoria. But there is hope and there is a road out. As we work towards recovery, the Morrison Government will have Australians’ backs.Regards,Josh FrydenbergTreasurer
Posted on September 2, 2020

Latest Blogs
The case for masks!
So what does The Matrix, Neo, Mindfulness and Resilience have in Common?
Great Job so Far ScoMo and Josh
Time to get your Profile and Centre of Influence happenning
Living your best Life
Ten Steps for Rebuilding Trust
Where are you on the wealth Pyramid ?
Proud to be an Australian
So who will dominate the 21st Century?
Love , Marriage, Companionship and Being Alone