4 networkers that you just want to avoid! 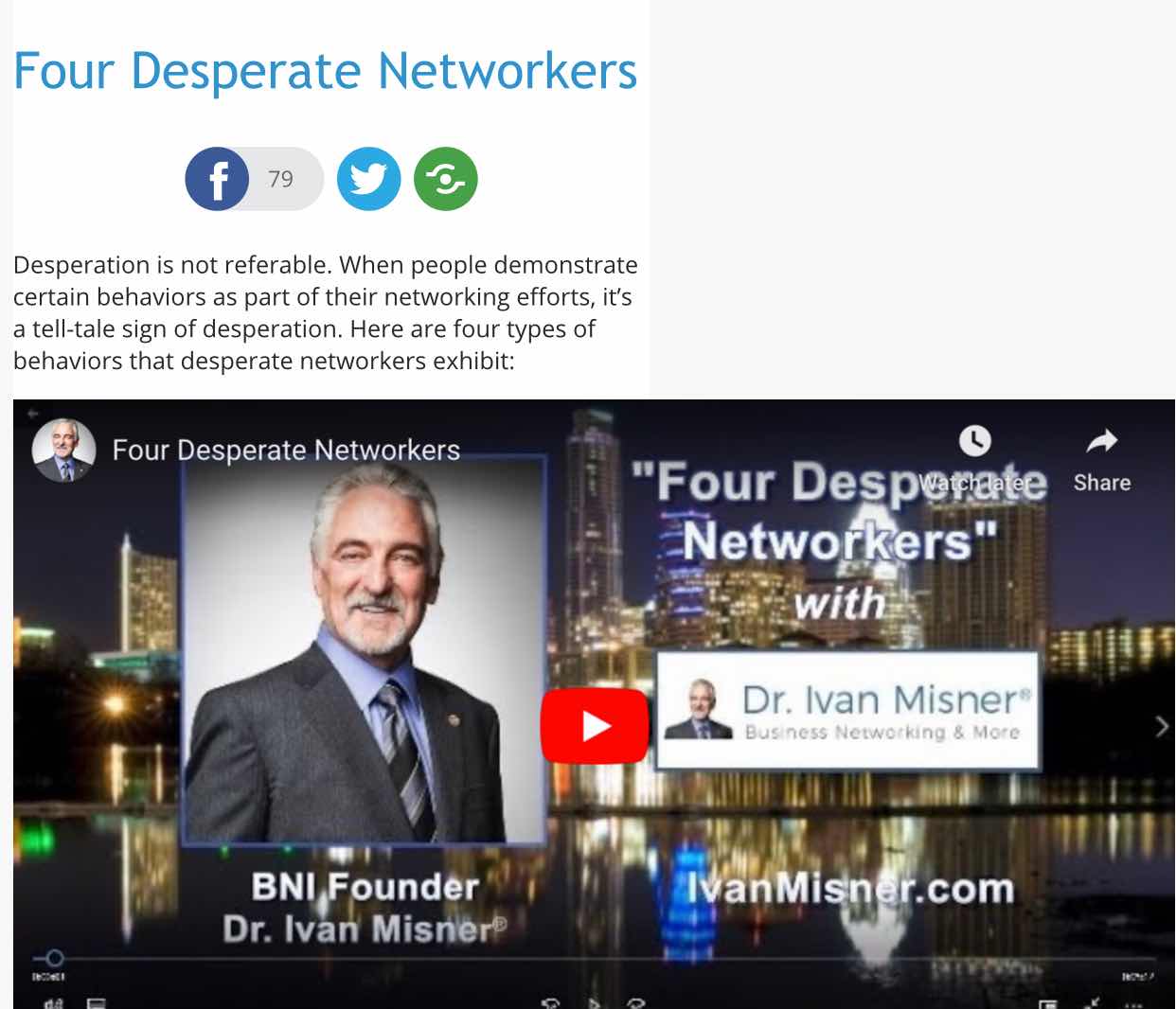 Ivan Meisner – founder of BNI and the king of referrals share with us 4 traits that you should not o at a networking event!!!!
Networking is a great opportunity to meet someone and focus on a BAMFAM – “book a meeting from a meeting”
Referron is a great way to not have to be a card dealer – and get details of people in the room!
Below are the 4

This is probably the most common form of desperation that I’ve seen over the years. The Card Dealer is a person that darts around the room passing out cards like they’re at a poker table. They don’t spend time really getting to know anyone (unless they think they can get something from them). To the Card Dealer, networking is mostly a numbers game. The more people they can pass their cards to – the better they’re doing (or so they think). Card Dealers tend to have a network that is a mile wide but an inch deep because they don’t spend time building relationships. It never works in the long-run and they just look inexperienced, frazzled, and yes – desperate.

Here’s the guy that thinks the closer he gets when he’s talking to you, the more you’ll be interested in what he’s saying. Nope. Not true. In fact, it has the opposite effect (especially if his breath has the aroma of a smelly camel). So, what’s the right distance to stand from someone without getting into their personal space? The answer to this question varies based on the cultural standards of the country you are in. In North America, it’s fairly common to have conversations at roughly “arm’s length” for people that you meet at a networking event. From my experience that distance is definitely less in some countries around the world. What’s also interesting is the issue of gender and personal space or “proxemics.” According to a “Journal of Psychology” study, “male-male pairs tend to interact at greater personal distances, whereas female-female pairs tend to interact closer.”

This is the person who confuses networking with direct selling. They meet you and immediately go into sales mode. They want you to do business with them without asking questions about you, your business, your interests, or your needs first. To this person, everyone is a target and every target is a dollar sign. These people are the reason why many individuals don’t like to go to networking events. They go to meetings and feel slimmed by people soliciting them for business. They leave the meeting and run home to get a shower.

Follow-up with the people you meet at a networking event is important. But be a professional – not a stalker. The New Best Friend is the over-eager seller who after you meet at a networking event – calls you, emails you, social media messages you, and tries to become your New Best Friend in the space of just a few days. Generally, they’re not actually trying to help you – they simply want to sell something to you. Granted, they may want to sell something to you because in their mind – it’s only to “help you,” but it’s never really about you. It’s about what they want from you. Desperation seeps from their pores. I’ve experienced this many times over my career. The one that stands out the most in my mind happened a couple years ago. I met a young man (late 20’s) at a networking event and he went right into “New Best Friend” mode – calling several times, emailing every day, messaging me on Facebook etc. But when he wrote me and said that he thought of himself like my son (yes, seriously – he said that) and he needed my help in his business venture – I had to pull the plug. I tried to pull it gently by talking about the importance of establishing credibility before pitching something and that the process of developing credibility takes time. Curiously, my “new son” abandoned me.